So we thought we’d start this week’s blog post with a quick and topical quiz for you!

Thinking about the Liberal Party’s behaviour last week in Canberra, were you:

Regardless of your response, you may in any event have found yourself quoting the political commentator and author, Mark Twain: “Truth is stranger than fiction”. At Worklogic, we have been finding solace in quoting a more contemporary but timeless phrase, and song: “Mamma Mia, here we go again”.

At the same time, however, our intellectual curiosity was certainly also piqued by the recent Canberra shenanigans. In particular, we were very keen to identify how many of the twelve core workplace team dysfunctions, which we have set out in our recently published book, “Fix Your Team”, were at play last week.

The answer? In summary, we have identified a perfect storm of no less than nine dysfunctional workplace team pathologies at play!

The 9 dysfunctions of the Federal Liberal team

Cliques, rumour, innuendo abounded in Canberra last week. Left unchecked, this type of destructive communication will inevitably lead to a serious lack of trust in any workplace. Certainly, two majorly factional cliques within the Liberal Party, together with the apparent existence of a ‘dirt file’ at the ready for use against a sitting PM, was never going to help with focusing everyone’s attention on the core business of leading the country. In fact, it led to parliament closing down early for the day, the first such occasion since Federation. Ouch.

Well, dare we note that a lot of politicians do have big personalities. Confidence will certainly help you put yourself forward as a candidate in the first place, and also to survive in the complex field of politics. But when individuals are acting in sarcastic, negative and disrespectful ways towards each other, the result is that communication dries up, and mistrust kicks in. Who needs an opposition to throw barbed criticism in parliament, when members within your own team are undermining you from within the team?

Any organisation needs to be able to say; “That is not appropriate behaviour”. When no-one is holding anyone to account, tricky behaviour can and does become normalised.

4. Skeleton in the closet

The deposing of Tony Abbott by Malcolm Turnbull clearly created a massive ‘skeleton in the closet’. Tony Abbott continued to seethe from the backbench and most political commentators this week have acknowledged that vengeance was the key driver behind the leadership spill.

Clearly the change in team leader from Tony Abbott to Malcolm Turnbull was not properly discussed, resolved, and, any resentment and anger identified and “put to bed”. How Malcolm Turnbull became leader was ’unfinished business’ – for some. It prevented the team from focussing on its core business, and came back to really destroy team unity.

The broader the demographic in a team, the more likely you are to have innovative and creative ways of thinking. So, how demographically varied are the MPSs of the Liberal Party Room? At a glance: mainly male, mainly white, mainly straight, mainly middle-aged – with the emphasis on mainly. Maybe, just maybe, a bit more diversity might have influenced how the group acted and behaved in recent weeks.

Whilst Malcolm Turnbull was labelling last week an “insurgency”, he would do well to reflect on whether his own behaviour was inadvertently a factor which contributed to the leadership crises last week.

Reneging on policies or promises in order to appease certain team members in a bid “to be liked at all costs” may have short term gains, but can backfire in the longer term. It may lead to a sense that anything (and everything) can be successfully challenged in time. If a leader indicates a sense that he is unable to effectively lead his team with a clear and consistent vision, then one needs to query if he is actually a leader in all but name.

There was not much sense of a plan last week, or if there was, it soon seemed to turn into daily organised chaos, with no-one really getting what they wanted or knowing in fact what they wanted.

Too much workload can lead to exhaustion, stress, and a lack of clear thinking in decision making. Just saying.

When a team is not unified, and not aiming to achieve the same things, and personal glory, power and status are seen as the ultimate prize, rather than the team’s goals, then team members act out of obsessive self-interest. That situation never ends well.

And so, what, we hear you ask, were the three core dysfunctions that were not present last week?

10. Nepotism: No one was trying to get their nephew to be pope or PM.

11. Workplace romance gone wrong: It was never “a love-in” that went sour.

12. Personal crisis: The crisis was all about the team. As far as we know, no-one’s behaviour was affected by domestic issues or crises.

6 fixes to address this team’s dysfunction

It is not uncommon for teams that need to be fixed to exhibit a few dysfunctions at the same time. Nine dysfunctions, however, is certainly a disturbingly high number. We strongly suggest that, to resolve the above, the Federal Liberal Party put our “Fix Your Team” philosophy into action, by implementing these six fixes:

We look forward to Worklogic having a confidential chat with ScoMo re the above! 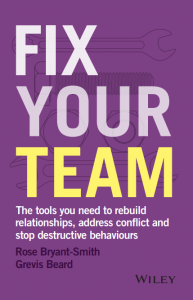 To learn more about the actions you can take to address team dysfunction – whether you are working in, managing or advising a dysfunctional team – read our new book, Fix Your Team, published by Wiley. We describe the 12 common team dysfunctions, and show you step-by-step how to fix them.

You can order your copies here.

Please contact Grevis for an obligation-free, confidential discussion on any challenges you face in the workplace.