In this edition, Senior Investigator, Tom Henry explains the key lessons for employers from recent appeals and FWC cases relating to procedural fairness and an employer’s duty of care when conducting an investigation, taking action on offensive private social media posts by employees and the need for employers to act on complaints in inappropriate behaviour, regardless of how they are made.

Procedural Fairness: Emery vs City of Stirling  in the Full Court

The Full Court appeal of this case is a fascinating example of how procedural fairness principles are the same, and need to be followed closely, whether in a court environment or in workplace investigation.

In the March 2018 edition of  the Worklogic e-Newsletter,  Associate Director Jason Clark reviewed a recent case, Emery vs City of Stirling [2018] FWC 914, where a beach inspector was dismissed for breaching Council policy. It was found that he had made unauthorised modifications to vehicles, which voided their warranties and therefore affected the Council’s capacity to provide life-saving services.

The employee was successful, however, in bringing an unfair dismissal case in the Fair Work Commission (‘FWC’), on the basis that the investigation process leading to his dismissal was flawed.  Those flaws included a lack of rigour in the investigation itself (lack of documentation, and key evidence being ignored which gave the perception that there was a potential for bias) and the fact that the investigation was undertaken by one of the key witnesses in the case, which was a clear conflict of interest. Deputy President Melanie Binet held that Mr Emery should be reinstated and that he should be back paid since the date of termination.

We can now report however that the City of Stirling successfully appealed the findings to the Full Bench, which decision is set out below.

In City of Stirling v Mr Kevin Emery [2018] FWCFB 2279 (20 April 2018), the Full Bench overturned the original decision by Deputy President Melanie Binet. It held that DP Binet had herself denied the employer procedural fairness in the hearing, when she failed to allow it to respond to her conclusion that a key witness had “something to hide“.

The Full Bench found that her conclusions from the evidence went beyond even the employer’s own arguments. Those conclusions included that: the employer’s supervisor had a “clear motivation” for giving evidence denying that he authorised the modifications, and, that his failure to exclude himself as the investigator, the way the investigation was conducted, and, the way the evidence was collected, all suggested that he ‘had something to hide’.

It held that, by not allowing the employer to respond to these conclusions, natural justice was denied to the employer. In conclusion, they said:

“The deputy president’s inferences (or findings) that [the supervisor] had a motivation to deny authorising the modifications because he was on a final warning, and that he had something to hide, were not put to [him], and the City of Stirling had no notice of them. In our view, the City of Stirling was denied procedural fairness in this regard.”

Overturning the decision, the bench referred the matter to Commissioner Bissett for rehearing.     This decision is of relevance because it illustrates, at a higher level, the sorts of reasoning that can hamper investigators at the coal face, in particular where such conclusions are not put to a party for a response.

When conducting an investigation, make sure you ensure that you provide an opportunity for a respondent to comment on relevant contradictory evidence.

Duty of Care:  Govier v The Uniting Church at the High Court

Since that time, the employee appealed the decision to the High Court: Govier v The Uniting Church in Australia Property Trust (Q) [2018] HCA Trans 65 (13 April 2018).

The question to be examined: ‘does the employer have a specific duty of care for the way in which a workplace investigation is performed?‘

Given the rather unsettled nature of previous relevant cases, hopes were high that the High Court would clarify the state of the law. These hopes were not fulfilled.  Five High Court judges actually revoked the grant of special leave to appeal on a technicality about what was included in documentary submissions to the High Court.

This left the decision of the Queensland Court of Appeal untouched. While employers can therefore continue to currently rely upon the decision of the Queensland Court of Appeal in Govier, there is a likelihood that the issue will again be tested by the Court in the future. Given the often inherently stressful nature of investigations, and the steps that can be taken to minimise such stress, there is the potential that a future court decision may extend the duty of care owed by an employer to employees who participate in investigations.

Regardless of what the current situation is at law, we suggest you take a best practice risk management approach. This approach involves:

In Luke Colwell v Sydney International Container Terminals Pty Limited [2018] FWC 174 (9 February 2018), Commissioner Donna McKenna of the FWC upheld the sacking of an employee after an investigation found that she shared a pornographic video via social media with ‘friends’ who included 19 male and female work colleagues.

The dismissal was upheld, even though the investigation did not follow any complaint but was employer-initiated.

One of the recipient Friends, a female employee, replied via messenger the following day: “Are you serious? Mate don’t send me that shit“. He then posted an apology on his Facebook page.

It is noteworthy that the employer, Hutchison, had been encouraging women to take up stevedoring roles, increasing the number of females in its 200-strong Port Botany workforce from four to 32 since 2014.

The employee who re-sent the video claimed Hutchison had no basis to dismiss him over the video, because the post was made in his own time, to his friends, and therefore there wasn’t a sufficient connection to work.

While Commissioner McKenna noted that the dismissal was for “out-of-work conduct, not involving any work-related facilities, and involving the [wharfie] and employees … who had self-selected to be Facebook friends” she rejected the argument that the posts had insufficient connection with work. This was because it was the employment relationship itself which led to the employee “having 20 colleagues as his Facebook friends and sending the video to 19 of them by Messenger”. As a result of this connection, the employer was warranted in conducting an investigation and then dismissing the employee for misconduct.

Commissioner McKenna said this was “not a case of an employer…attempting to exercise supervision over the private [social media] activities of employees“. Rather, the employer “was trying to respond to what was understood to be the dissemination of pornography to employees” in the context of its Values and policies outlawing sexual harassment of female employees. As such, the employee’s activities negatively affected the employer and the employment relationship.

This decision is of note as it is consistent with many previous ‘out of hours’ decisions. In these cases, dismissals of employees for even ‘private’ (as distinct from public) social media posts (i.e. only to their friends) have been held to have a sufficient connection to the workplace, where the interests or reputation of the employer, or the employment relationship, is damaged.

To mitgate against this risk:

Finally it is worth remembering the implications from another importance case Watts v Ramsay HealthCare.[2] discussed in a recent blog post, where the FWC found that an HR advisor and a manager consciously and unreasonably decided not to investigate an employee’s bullying complaints. The HR advisor and manager had imposed their own subjective requirements on the information she had to provide before they would investigate.

Commissioner Bruce Williams found “no reasonable explanation” for the employer’s failure to act on the bullying complaints made by a catering assistant and was left in “no doubt” of the need to issue an order to prevent further bullying.

In fact, the Commissioner held that the decision not to investigate the employee’s claims of bullying itself was an incident of bullying.

Once an employer is on notice of concerns of bullying, do not ignore them, or ask them to send in a “formal complaint” before taking any steps. 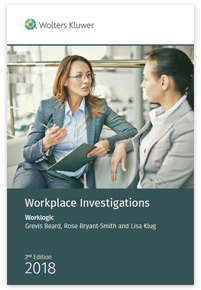 For those looking for an jam-packed one hour overview of the steps you need to undertake for investigations into bullying and sexual harassment, tune into Grevis Beard’s webinar  presented by CCH Learning on Tuesday 19 June. Register now

Worklogic also offers an intensive one-day training courses on conducting Effective Workplace Investigations.  Register now for our next session in Melbourne, or organise to run this course in-house.

[1] The judgment of the District Court, upheld by the Queensland Court of Appeal.